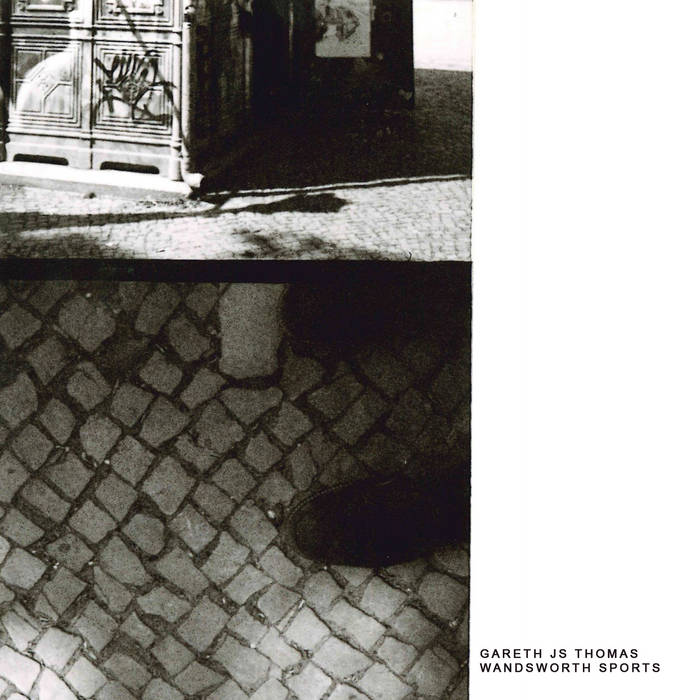 Opener, 'Lurk on my block get hurt on my block', operates in a murky netherzone of existential melancholy, the mangled, choked voices in the background instilling a suffocating sense of futility, while 'Go home' disorientates with its warped club aesthetic and drifiting tempos.

'For a gallant stranger' provides a brief blast of sound-collage cut-up abstraction while the beautiful and fragile 'Metros' comes off something like one of Burial's beatless, atmospheric excursions refracted through the lense of William Basinski.

This is nicely rounded off with a healthy dose of twisted humour on the closer 'Acid Dick' and it all makes for a truly arresting listening experience.

You may already know Gareth from his various other prolific musical projects - USA NAILS, SILENT FRONT, MAYORS OF MIYAZAKI, and also for his excellent photography work, which has exhibited in a number of locations and some of which adorns the cover of 'Wandsworth Sports'.


REVIEWS
-------------
Over the course of the album our lug holes are treated to dreamy ambient textures and eerie dronescapes, some sound collage/sampling/cut-up action and a wee dose of cranky techno to boot. All super atmospheric stuff ,that occasionally gets pretty weird - with an absurd and wicked sense of humour.
NORMAN RECORDS
www.normanrecords.com/records/162832-gareth-js-thomas-wandsworth-sports

I liked his ambient approach, un 'Metros' for instance, which has some rusty swing in the playground and broken up string sounds in a haunted house soundtrack...
FRANS DE WAARD, VITAL WEEKLY, ISSUE 1081
www.vitalweekly.net/1081.html

An intriguing tape that runs from Assault on Precinct 13 gang-synth-pulses to Neighbourhood Watch whimsy via the Australian Soap Opera.

The superb ranting on the opener ‘Lurk On My Block Get Hurt On My Block’ is both semi-comprehensible and threatening as it phases in-and-out of the great sleazy wings of drone-synth heaving left to right.
JOE MURRAY, NO AUDIENCE UNDERGROUND, RADIO FREE MIDWICH
radiofreemidwich.wordpress.com/2017/06/19/dental-tang-rfm-on-aqua-dentata-gareth-js-thomas-kwc-yaca-microdeform/

At school, where he was ordered to avoid all excitement due to a heart condition, Gareth was an average student with few friends who was an occasional target for mockery and bullying by neighbourhood children and classmates. He was known to assist the school truant officer and volunteer to run errands for teachers and neighbours. During the fourth grade, Gareth began to suffer blackouts. He was occasionally hospitalised due to these seizures, and also in 1989 for a burst appendix. Gareth estimates that he has spent almost a year in the hospital for these episodes between the ages of 14 and 18, and attributed the decline in his grades to his time out of school. His friends suspected the episodes were an effort to gain sympathy and attention; on many occasions, they would accuse him of faking, even as he lay in a hospital bed.

Gareth's only significant athletic avocation is snow skiing, which he pursues enthusiastically using stolen equipment and forged lift tickets. During high school he was arrested at least twice on suspicion of burglary and auto theft. When he reached age 18 the details of the incidents were expunged from his record, as is customary in Washington and most other states.