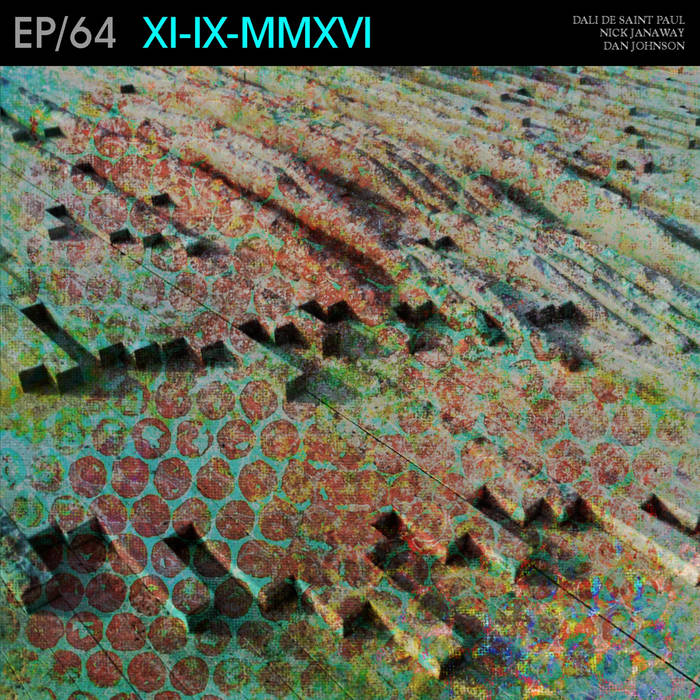 The next instalment from Aphelion Editions is a joyous slab of cacophonic, forward-thinking group improvisation from EP/64.

On the A-side, a live multi-track recording from the trio's second ever show back in September 2016 wonderfully captures the raw unpredictability and twists and turns of these freeform excursions along with the energy and sense of fun that emerges from sonic adventure and exploration.

At its core, EP/64 is an improvising unit that consistently morphs and reassembles all manner of disparate ideas and influences into its own unique brew, utilising a skeletal combination of drum kit, laptop processing and extended vocal techniques to eschew traditional band structures and create a refreshing push-pull dynamic, with a fervent, almost psychedelic sensibility, centred around Dan’s looping, circular rhythms and Dali and Nick’s contributions darting in and out of the mix at will.

On the B-side, a set of reinterpretations from Stuart Chalmers, Burl and Microdeform pull things in further trajectories to finally complete the journey. Time to rewire your brain.


REVIEWS
--------------
"...some lovely Galás screamy details, an adagio of agitations that quickly unearths its treasure on a staple of tribal heat and yodeling yapes. A vibe that leaves you envious that you missed out on this life-affirming sparkle at first hand..."
MICHAEL RODHAM-HEAPS, FREQ
freq.org.uk/reviews/ep64-xi-ix-mmxvi/

"...with a name like that, this’ll surely be topping the charts in weeks! Ok, maybe not. But this improvised sound-weirdo session is sure to delight fans of this sort of stuff, with its slippery, woozy mixture of vocals, electronics, and percussion...."
NORMAN RECORDS
www.normanrecords.com/records/167762-ep-64-xiixmmxvi

Improvised and performed live at The Old England Pub, Bristol on 11th September 2016