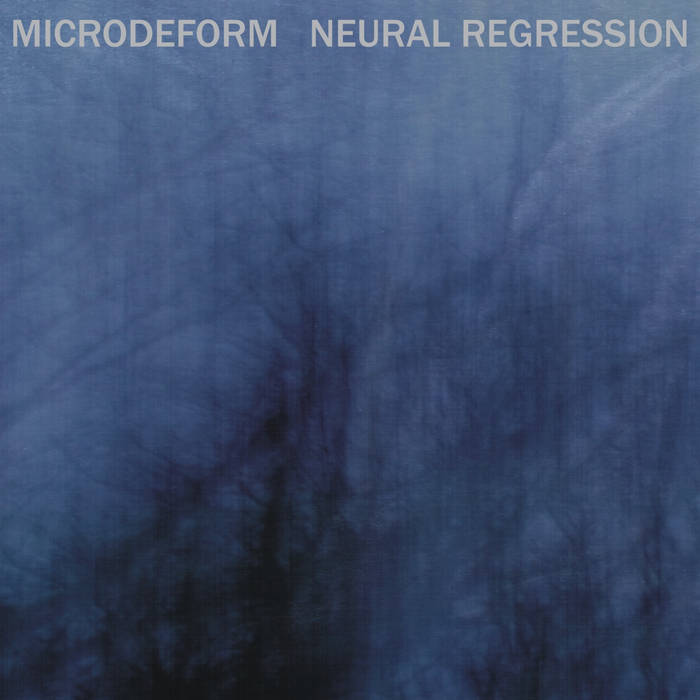 'Neural Regression' was Initially released on a limited run of cassettes via excellent Bristol-based label Bumtapes in November 2016 ( see: bumtapes.blogspot.co.uk/2016/11/microdeform-neural-regression-c50.html ), and we decided it was only right to collaborate once more with Ross for the beautiful screenprinted metalic dust-jackets that house this new CD-R edition. Additional photographic artwork is also included on a double-sided postcard insert.


Microdeform’s new album 'Neural Regression' extends the exploration of space and granular sound layers displayed on the debut 'Mortlake' into further expressive realms of aural diffraction. Jazz and classical motifs are refracted by physical audio manipulation through a tapestry of tones – from the lone horn calling across the fog of memory and melody on opener ‘Reverie’ to the bursts of trapped string players encased in the drowning swirl of closer ‘Provenance’.

In between, 'Neural Regression' exemplifies Microdeform’s attention to every sonic opportunity in detail and space, tone and timbre. The coruscating loop maelstrom of ‘The Fire of Revolution’, spectral blast-furnace future of ‘Crosstalk’, thundering industrial wave-machine churn of the title track and the subtle yet foreboding sense of unease of 'Self Exile' point to many directions of departure within the central exploratory framework. 'Neural Regression' is a further, deeper step into Microdeform's signature sound-world.
(ANTHONY BROWN)
bumtapes.blogspot.co.uk/2016/11/microdeform-neural-regression-c50.html


REVIEWS
-------------
"The listening experience is akin to floating on the calmest of oceans one minute, only to get sucked into turbulence and flirtations with suddenly materialising whirlpools the next. It’s simultaneously hypnotic, cacophonous, and thrillingly intense." 9/10
JAMIE, NORMAN RECORDS
www.normanrecords.com/records/165506

"Due to the nature and the variables of equipment used, everything sounds tactile and organic, keeping the dynamics and movements unpredictable throughout, a real hands-on DIY piece of off-the cuff samplism and re-arranging of found sounds. Big tip!"
RWD FWD (Bumtapes Cassette Edition)
rwdfwd.com/products/microdeform-neural-regression/

"In the whole genre of 'ambient/atmospheric/industrial' Microdeform are doing something I don't hear a lot (vinyl abuse, lots of sound effects) and after that I had an odd urge to re-visit some old zoviet*france music."
FRANS DE WAARD, VITAL WEEKLY, ISSUE 1081
www.vitalweekly.net/1081.html

"Calling to mind the dancing Dansettes of Philip Jeck or Andrew Deutsch´s Loops Over Land, his dub collage of distressed vinyl reaches out to be felt, even as it remains elusive.

A dream (like landing on Eno´s On Land in “Self-Exile”) might be quickly followed by its funhouse nightmare. Heavenly whale song swims right into a jazz combo and knocks razor-edged cymbals off their stands. A warm embrace turns out to be a freezing maelstrom."
STEPHEN FRUITMAN, CYCLIC DEFROST
www.cyclicdefrost.com/2017/09/microdeform-neural-regression-aphelion-editions/